Daily Truth:  Jesus said, “The Spirit of the LORD is upon Me, Because He has anointed me to preach the gospel to the poor; He sent me to heal the broken hearted, To proclaim liberty to the captives And recovery of sight the blind, To set at liberty to those who are oppressed.” 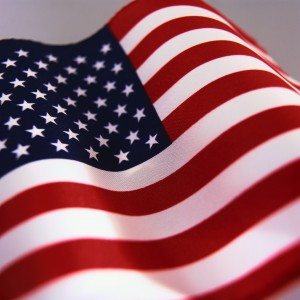 Flag Day is about celebrating liberty and remembrance.   Liberty is defined as” freedom from control, interference or physical restraint”. Jesus spoke of liberty.  He came to “make you free” (John 8:32).

Flag Day represents a day in which we honor our country by honoring our country’s flag.  The American Flag symbolizes liberty to all.

The Flag Goes By

Hats off!
Along the street there comes
A blare of bugles, a ruffle of drums,
A flash of color beneath the sky:
Hats off!
The flag is passing by!

Blue and crimson and white it shines,
Over the steel-tipped, ordered lines.
Hats off!
The colors before us fly;
But more than the flag is passing by:

Sea-fights and land-fights, grim and great,
Fought to make and to save the State;
Weary marches and sinking ships;
Cheers of victory on dying lips;

Sign of a nation, great and strong
To ward her people from foreign wrong;
Pride and glory and honor, – all
Live in the colors to stand or fall.

Hats off!
Along the street there comes
A blare of bugles, a ruffle of drums;
And loyal hearts are beating high:
Hats off!
The flag is passing by!

Happy Flag Day to you!

Until the next “Truth” telling moment,