I love the appearance of the collage pumpkins and mums  make on a doorstep. Their appearance marks the beginning of fall.  To me, they are some of the most beautiful fruit.    I mean, really, how many other fruit do we decorate our doorsteps with? (Yes, it is technically a fruit.)

There is one thing that I despised about pumpkins when I was a little girl – the guts!  I hated it when my dad would pull out a handful a pumpkin guts and try to get us dirty with it.  To me the insides were ooey, gooey, and slimy.

Then, we would have to rinse the pumpkin seeds of the stringy goo so that we could roast the seeds. We all enjoyed the seeds but to get to the good part you had to go through all the gross part!

I was thinking about that the other day when I was cleaning out the insides of some freshly cooked pumpkins.

I had gone with my boys on their field trip to the pumpkin patch.  My youngest picked out a perfectly shaped pumpkin.  My older son picked out a pumpkin with some marks on it. I picked out one with some mud on it but I could tell it was a good one. 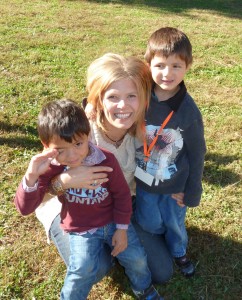 My middle son couldn’t believe that I would pick a dirty one until he started wiping the dirt off in the hay of the wagon.  Slowly, as the dirt was rubbed away, he saw what I had seen.  He took one look at his marked up pumpkin and decided he wanted mine.

When you looked at the outward appearance of our two pumpkins, my was definitely a 10.  However, when I cut them open, the insides were both consistent of that ooey, gooey mess.

It reminded me of Jesus talking to the pharisees. The pharisees were so concerned about their outward appearance that they didn’t bother to take care of what was inside.

In fact, the Savior used rather forceful language to describe them (Matthew 23:27).  He compares the pharisees to whited sepulchres – beautiful on the outside but full of dead bodies.

Don’t get me wrong, your appearance does say a lot about you.  Remember, God told Samuel that man looks on the outward appearance.  We can’t help it, we’re human. However, that shouldn’t be our focus.

Our outward appearance is not the most important part of our appearance.  God doesn’t see how well we dress or if we have the latest fashion or if our house looks like something out of Pottery Barn.  Instead God looks at our heart.  He knows every thought, motive, concern that we have.  He sees our heart.

There are a myriad of examples in the Bible where God looked on the heart and not the outward appearance.  One last example is given to us in Luke 7.

Go back to those whited sepulchre pharisees.  One woman, the Bible calls her a sinner, heard that Jesus was eating at one of these pharisee’s homes.  She brings a bottle of ointment, about a years worth of wages, and walks right into this pharisee’s home.

She then does the unthinkable.  She washes Jesus feet with the ointment and her tears and then washes them with her hair.  Jesus looked past her outward appearance and looked right into her heart.

Moms, as we raise our children we need to be more concerned with their heart than their appearance.

So how do we use the pumpkin to teach our little ones about God looking on the heart.

3.  Sometimes it isn’t pleasant but God has to scoop out all the sin to help us make our hearts match our outward appearance. (Psalms 51:7)

So, as you clean out the inside of your pumpkins this year, take the time to teach your own little “pumpkins” the lesson you can learn from a pumpkin:  Man looks on the outward appearance but God looks on the heart.