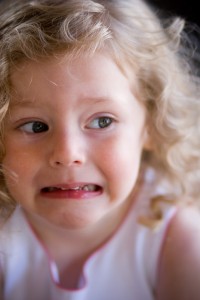 My boys fear storms at night. So, the lights stay on.

My middle daughter feared sleeping in her room at night because the dark blue walls made her think monsters were in the room.  (Her walls are now a lovely shade of a pale green).

My oldest daughter fears getting on a school bus.

At times, I fear running by myself.  I think it’s because I have read to many Reader’s Digest “Drama in Real Life”!  So, I take my pepper spray, use a little wisdom, and plug in the music.

Fear is such a powerful emotion and can be a very controlling emotion if we allow it.

We were having our family devotions the other day out of the Heroes and Villains book that we have been enjoying this summer. The scripture was on Peter denying Christ. 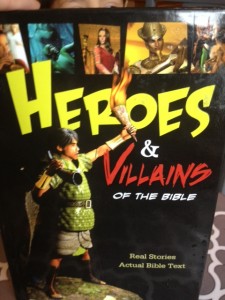 Yes, denying Christ was a horrible thing for him to do.

Yet, what was the basis of him denying Christ?

Let’s see.  One of his friends betrayed Jesus for 30 pieces of silver, his other friends scattered, and he had watched at a distance the events in the home of the high priest.  Peter also was fully aware of the cruelty of the Romans.

So, what was the underlying issue that caused Peter to deny Christ?  Fear.

Yet, despite Peter’s fear leading to his denial of Christ, God used him above and beyond what Peter could have even imagined at the Day of Pentecost!

Fear caused David to lie and commit murder. Yet, God would later call him a “Man after His own heart”.

Fear caused Jacob to run from Esau rather than admit his deception. Yet, God would have Jesus come through Jacob’s line.

Fear can be dibilitating.  Yet, fear can also cause us to be victorious.

Fear caused Esther to pray and fast and then go before the King to ask for the salvation of her people.

Fear caused Shadrach, Meshach, and Obednego to stand before King Nebuchadnezzar and be thrown into the fiery furnace.

Fear caused Daniel to continue praying three times a day to God and then be cast into the lion’s den.

What was the difference?  They allowed their fear to become a demonstration of their faith. They had faith that their God was bigger than their fear.

So, back to the devotional.

“Kids, do you think Peter was afraid that night?

“Do you think God could have helped him overcome that fear if Peter had asked?”

Turning to my oldest, “So, can God help you over come your fears such as getting on the bus this Thursday to go play in a volleyball game?”

“I know.  But don’t you think your God is bigger than your fear?”

“Don’t you think the devil is using the emotion and lie of fear to cause you not to have faith that God will help you on that bus?”

1.  Prayer.  Pray with your children.  Pray for their specific fear know matter what it is.  Pray with them that God would give them the strength to overcome that fear.

2.  Scripture.  It has been said that there are over 365 “Fear Not” verses in the Bible – one for each day of the year.  Give them scripture that deals with fear to help them conquer those fears.  At night, my oldest listens to the Psalms being read  from the Bible Gateway app.

3.  Music.  Good Christian music is so calming as well as relaxing classical music. We often play music for the kids to settle down.  When I was delivering my oldest, we brought a CD player and some soft classical music.  All the nurses wanted to stay in our room because it was so relaxing.

Here are two of our favorite “fear” verses.

“Fear thou not; for I am with thee: be not dismayed; for I am thy God: I will strengthen thee; yea, I will help thee; yea, I will uphold thee with the right hand of my righteousness.”  Isaiah 41:10 (Actually, you really need to read the whole chapter.)

So, Thursday afternoon, I will be taking a step of faith with so many other parents as our children take their own step of faith getting onto the buses to go to games, turning our fear into faith.