Daily Truth:   “Righteousness shall go before him; and shall set us in the way of his steps.” 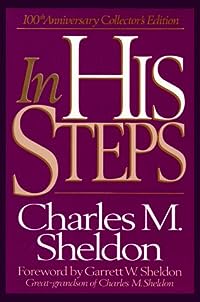 You have probably seen the WWJD bracelets.  Did you know that they were based on the book In His Steps?

The story In His Steps was story written by Charles M. Sheldon in 1896.  It was read a chapter at a time to young people on Sunday evenings in the Central Congregational Church, Topeka, Kansas.  “The Reverend Sheldon found that reading a dramatic story illustrating Christian principles in the everyday lives of ordinary people, like Jesus’ parables, drew crowds of young people to the church on Sunday evenings.”

“Sheldon’s church and church groups around the world took the book’s pledge to ask ‘What would Jesus do?’  He received dozens of letters a day relating how that pledge had changed lives, restored families, strengthened relationships, cleaned up business practices and politics, and given peace and joy to countless believers.”

“Newspapers and magazines serialized In His Steps.  This simple but inspired religious novel changed the work in the early twentieth century.”  An estimated thirty million copies in fifteen languages worldwide have been published.  Due to faulty copyright Sheldon did not earn very much money from his bestselling book.  It is said that he rejoiced knowing that the message was so popular.

The story is told through ordinary people led by their pastor.  These ordinary people take a pledge to ask “What would Jesus do?” whenever they are asked to make a decision.   Each person’s story emphasizes the importance of immediate obedience and personal Christian action in daily choices.

Sheldon’s great-grandson, Garrett W. Sheldon, wrote a contemporary retelling of his great-grandfather’s story and entitled it What Would Jesus Do?  This book possesses the same wonderful elements of the original story yet in a time period better understood for today’s reader.

It is exciting that a children’s book has also been written.  This book captures the same message as the original book and asks after each short story for the child to make a choice according to the life circumstance in the chapter. 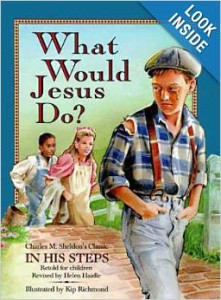 There is also a character building game based upon In His Steps.

What would Jesus do in the situations of life is a good question to ask ourselves.  It helps children (and adults) to think about their actions and act responsibly rather than impulsively. A Christian has the Holy Spirit to guide and direct. Yet, there is always a struggle between the “old man and the new man”.

These resources provide good practice for a life that brings honor and glory to God.

Until the next “Truth”sharing moment,

Quotes from:  In His Steps 100th Anniversary Collector’s Edition published by Broadman & Holman 1995