Daily Truth: “When I call to remembrance the genuine faith that is in you, which dwelt first in your grandmother Lois and your mother Eunice, and I am persuaded is in you also.”  II Timothy 1:5 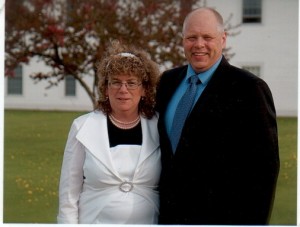 Tomorrow is going to be a tough day for my family.  It marks the one year passing of my dad. He was so proud to be a grandparent!  He was one of those that proudly wore his grandparent t-shirt and hat all at the same time.  He prayed daily for all his grandchildren.

When my oldest child was born, he wrote his thoughts on being a grandparent. My sister found those thoughts shortly after he passed.  So, today I am posting my dad’s words.

Having just become a new grandparent, I again realize the importance of passing our spiritual heritage on to our young people.  Even though grandparents of teens are two generations away from them, grandparents can have a strong spiritual influence on their grandchildren.

It was my grandfather who first confronted me with my need for the Savior.  We had been having a series of evangelistic meetings, and one cold March Iowa night after the service, in the church parking lot, he asked me if I knew the Lord Jesus Christ as my Savior.

Although I was not saved at that time and did not accept Christ as my Savior at that moment, his forthright question led to my salvation at the age of 6.

Throughout his life he remained an example and model of faith in our Lord Jesus Christ.  I remember that as a teen, he would always start his public prayers with the phrase, “Our kind heavenly father,” which knowing my godly grandfather, encapsulated his Savior’s love, mercy, and, grace towards himself.

Grandparents, you may not think you have much influence on your grandchildren, especially if they are teens; but they sure watch you!  Take advantage of this, and pass on your spiritual heritage by being a model of faith for them.  When possible, be involved in their spiritual lives.

My encouragement to you moms is this – your children are watching those around them.  Thrust godly examples into their lives.  If they have godly grandparents, let those grandparents help pass on their godly heritage.  You never know how great their influence will be.