Daily Truth: “But command Joshua, and encourage him and strengthen him.”  Deuteronomy 3:28 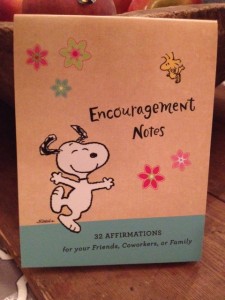 Who doesn’t need someone to come along side them every once in a while and encourage them in the work that they are doing?

We all do.  But what does “encourage” mean?

Encourage is defined as “giving support, confidence, or hope to someone.”

Ok. So here’s a scenario.

It has been one of those “no” days.  A day in which the kids were having trouble obeying.  You know what I mean – a no “encourage” day.

Then you hear the kiddos say, “Let’s play mommy”.

Fearful of how that will transpire, based off of my performance thus far, a “stop” is quickly put to that game.

Moses has just been told he won’t be able to go into the Promise Land because he didn’t follow God’s directions explicitly (that could be a whole other topic – but I digress).

So, God tells Moses to go up to Mount Pisgah and look all around.  Everything Moses sees will be inherited by the Israelites under Joshua’s leadership.  Then God says to go and encourage Joshua and to strengthen him. (Deuteronomy 3:27-29)

I would say Moses had had a pretty rough day up to that point.  All those years leading the Israelites, listening to their complaining about EVERYTHING, having to deal with their disobedience, and putting up with all their whining and griping and because Moses got angry and struck a rock, God told him he wouldn’t be able to go into the Promised Land.

Yep.  That makes for a pretty rough day.

Then God basically says to Moses, “Get out of yourself and encourage this young man, who you have been training in My ways, to have the strength to lead My people into the Promised Land.  After all, it is a little scary and overwhelming and you know it”.

So, how can we as mom’s encourage our little guys who we have been training in His ways, even when we don’t always feel like it.

Here are some ideas.  Not all are original to me.

“Can we have ice cream for breakfast?”

The key to this (I am told – I am a little nervous about trying this one) is not to tell the kids it’s a “yes” day.  Let me know how it works out for you.

When my eldest went to camp last summer, I wrote her a card for everyday she was gone, labeled them, and put them in her suitcase.  I was so proud of myself. After all, how many other mothers would do that?

She thanked me for the cards when she got back but asked, “Do you think next year you could mail them to me at camp instead?”  (A verse about “pride goeth before a fall” comes to mind.)

3. Slip cards into their backpacks.

Hallmark has a selection of cards just to encourage your kids.  They aren’t hard to find or make them yourself.

4.  Put notes in their lunchboxes. 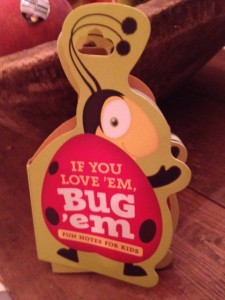 My kids LOVE this and they keep them for a long time.

The neat thing about these is that they don’t have to be elaborate.  If you are like me, creative words and pithy sayings don’t come readily to me.  So, I get a little help.

Life Way Christian Book Store had a notepad of the Snoopy characters with words to encourage.  Just rip one out and stick it in their lunchboxes.

Hallmark had a book called “If You Love ’em, Bug ’em”.  These are in the shape of a ladybug with fun bug sayings like, “It really bugs me we can’t be together – have a great day.”

(P.S. got some similar notes for my hubs – but they’re a little more…. ummm …..flirtatious). 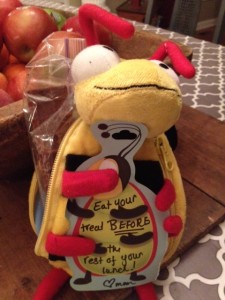 5.  Stick a fun surprise in their lunchbox.

(My kids are so going to love their “Encourage”  chocolate bar surprise tomorrow.)

6.  Of course nothing beats hugs and words like, “I’m proud of you kiddo.”

My dad used to always say that.  Those would be the words I would need to encourage me and give me strength to finish my task.

So go out and be mom’s that encourage their kids.  After all, life can be a little overwhelming – even for a 4 year old!